Compass Group Ireland is supporting the future of sustainable horticulture and helping to reduce food miles under a new contract with Ireland’s first commercial vertical farmer.

The foodservice provider is supporting Brian O’Reilly, a former mushroom farmer, and his brother Aidan, who have launched the first commercial hydroponic farm in Ireland to grow basil, baby leaf mixes and microgreens 365 days a year.

Operating under the new Emerald Greens brand, the brothers are using cutting-edge indoor farming technology to grow crops sustainably year-round from their rural base in Ballyporeen in Co. Tipperary. 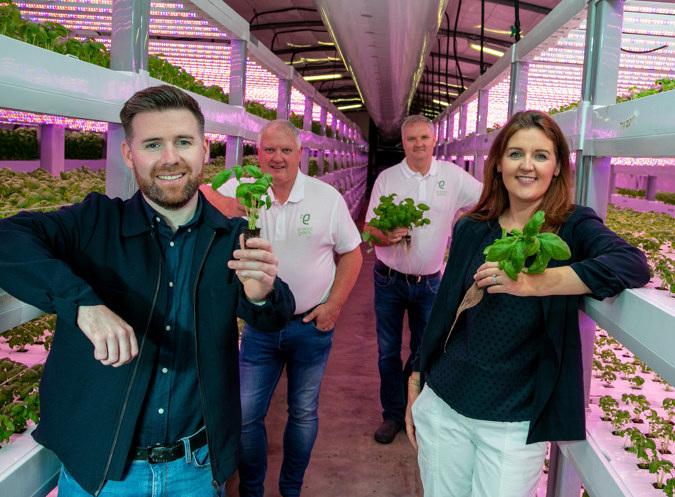 Compass Ireland will use 25% of the basil produced each week by Emerald Greens (circa 200kg) in fresh, healthy meals for client companies around the country.

As a result, Emerald Greens will see production capacity rise by 20%, allowing the O’Reilly’s to expand their vertical farming business with the addition of a second growing tunnel.

Compass Ireland is also partnering with Ross Hazel Farm, a fruit and vegetable producer in Co. Meath, to convert former mushroom-growing tunnels on its Clonard site into vertical farming units.

Ross Hazel Farm is run by Lynsay Orton, who has been a Compass Ireland supplier since 2016. Orton works in partnership with Compass Ireland to cultivate sustainable seasonal vegetables

The partnerships with the O’Reilly’s and Orton are part of Compass Ireland’s commitment to promoting sustainable production practices across its supply chain, as outlined in the company’s recently published Net Zero plan. 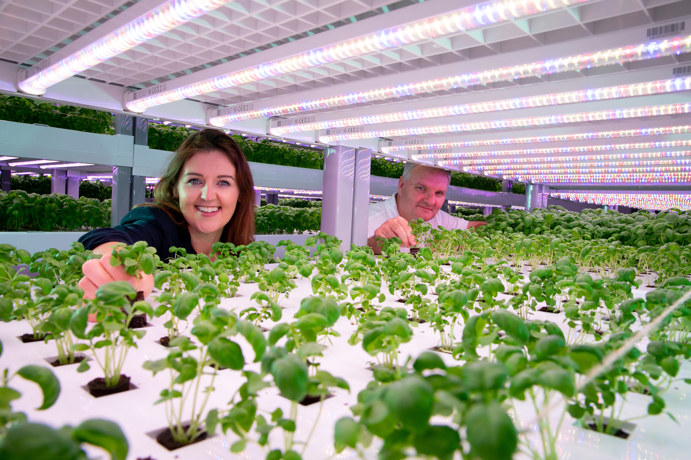 Compass Ireland became the first foodservice company in the country to publish such a plan in May and has committed to reaching Net Zero greenhouse gas emissions across its own operations and value chain by 2030.

Compass Ireland has also become a signatory of Business Ambition for 1.5°C, aligning its climate targets with the Paris Agreement.

In doing so, the company has signed up to both Business in the Community’s Low Carbon Pledge and the UN’s Race to Zero campaign. As part of this commitment, Compass Ireland is supporting sustainable growing practices among its Irish producers.

The foodservice provider works with 180 Irish food producers and spends €35 million per year on Irish food. Seventy per cent of the food sourced by Compass Ireland for the Irish market is produced here.

“At Compass, we believe it is our responsibility to contribute to a future of sustainable food production and regenerative agricultural practices. Sourcing local and seasonal food ingredients is a key priority for us.

“Emerald Greens is at the forefront of Ireland's grassroots movement towards more sustainable food production. Vertical farming allows growers to produce fresh greens here in Ireland, which would otherwise be imported. It requires less land and uses up to 10 times less water than traditional soil crops, through recycling and reuse. Our decision to support Ireland’s first commercial vertical farmer is about supporting the changes that are happening on the ground today for a sustainable tomorrow.”

Originally from Dublin, Emerald Greens co-founder and Managing Director Brian O'Reilly established his mushroom-growing business in Ballyporeen in 1999, before recently pivoting to vertical farming and converting one of his eight growing tunnels into a hydroponic facility using a Sanabio vertical farming system acquired from Dublin company Farmony.

Plans are already underway to begin growing microgreens in the second tunnel before the end of the year and further tunnels will be added in 2022.

Brian O’Reilly’s decision to move into vertical farming was prompted by the opportunity to maintain year-round production with better margins and less reliance on UK exports post-Brexit.

“This deal with Compass Ireland is a game-changer for our new vertical business at a critical time in our development. It gives us much needed security and allows us to plan ahead and make a success of this new way of growing fresh produce year-round. We are no longer export dependent as a business. Instead, we are showing other producers a more sustainable way of growing a greater range of fresh green produce here in Ireland for the local market.”